TL;DR: Pictures of newborns are incredibly popular on social media. So, Cedars-Sinai hospital and the LA Dodgers used the power of cute babies in baseball beanies to promote #LittleDodgerFan and raise brand awareness during the season. 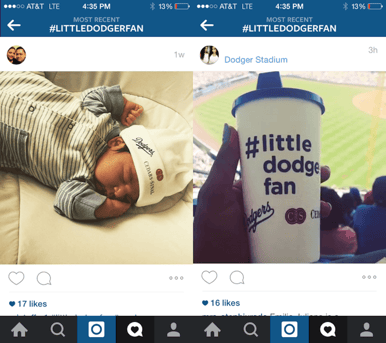 More than 6,000 babies are born each year at Cedars-Sinai hospital in Los Angeles and the LA Dodgers would like all of them to be Dodgers fans. The Dodgers, who have reached three World Series in the last 10 years, were looking for a creative way to recruit new fans, and bring a few more “awwws” to the stadium.

Cedars-Sinai is already an official sponsor of the LA Dodgers. The two joined forces with Boundless to create a promotion that raised brand awareness and connected fans on social media.

Branded beanies were distributed to thousands of newborns at Cedars-Sinai and new parents were encouraged to upload pics of their babies in their beanies with the hashtag #LittleDodgerFan. Selected photos were shown on the jumbotron during live games. In conjunction with this campaign, the LA Dodgers also handed out branded sippy cups as in-stadium promotions for fans.

By working with a creative partner, Cedars-Sinai’s digital promotion generated more than 6,000 uses of the hashtag on Instagram alone in the first month.